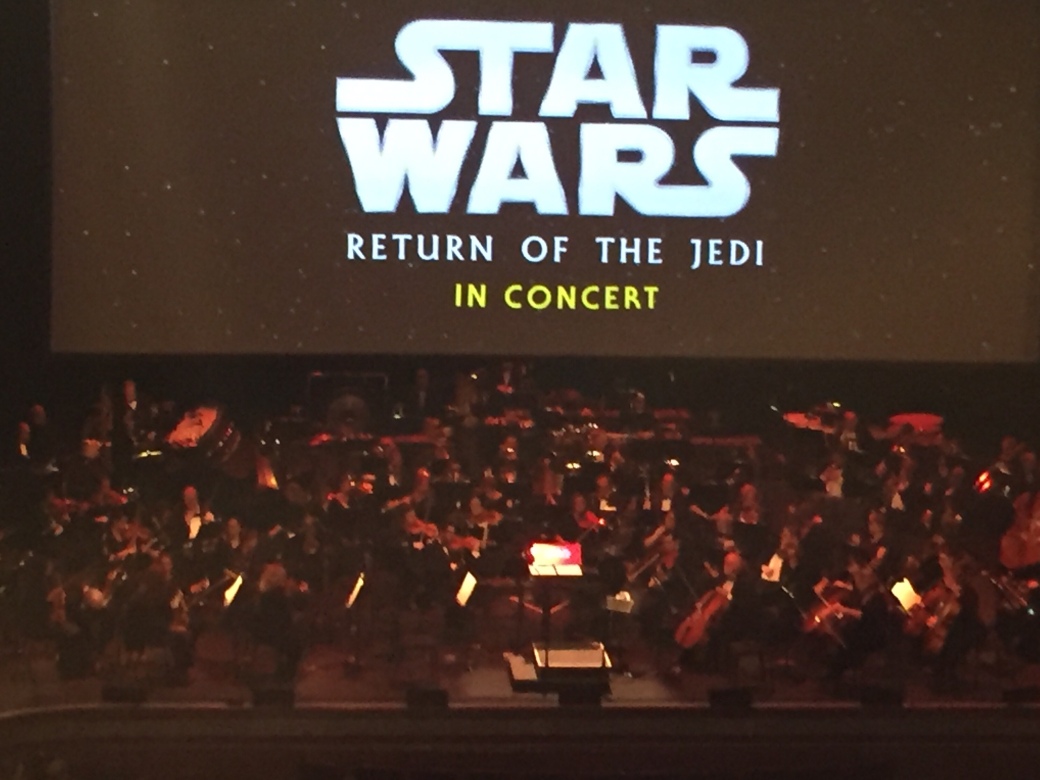 Yes, you read that correctly. The Orlando Philharmonic Orchestra (OPO) played a symphonic concert of John Williams’ soundtrack to Return of the Jedi at the Dr. Phillips Performing Arts Center in downtown Orlando, Florida. Having missed the first two concerts (Star Wars and The Empire Strikes Back), I was determined not to miss this one, if only as a belated birthday present to myself. And wow, I wish I’d gone to the other two. What a marvelous experience!

I’ve written about John Williams’ music before, but it’s a much different experience hearing a live orchestra play. I suppose I should explain the setup: the DP Center ran the actual movie on a big screen for the audience with subtitles below it and–so far as I could tell–no music soundtrack. (Is such a thing feasible? Given that Disney now owns Lucasfilm, is local to Orlando, and is a major donor to the Center, yes I think that’s entirely likely.) The music soundtrack, minus a couple parts I’ll come to, was provided by the OPO.

I recently helped a local group as a “grip” for the 48-Hour Film Project, so I was more aware of the collaborative nature of filmmaking; however, we tend to overlook the musical portion of movie soundtracks, which are a sub-collaboration all their own. It’s hard for this non-musical person to wrap his head around how much practice, timing, coordination, and sheer talent it takes to have ~45 people play different instruments  and make everything come out right.

And there’s also this: like the film itself, in reality the musical parts (played in the original film by the London Symphony Orchestra) are performed by individual scenes, with the different pieces of music spliced into the background as needed in the story. They are also usually played multiple times until the conductor (in the case of the original, also the composer, John Williams) is satisfied with the result. For example, one of the bonus features on the 1997 edition of the Episode IV soundtrack is a recording of something like seven different versions of the original opening theme. In other words, it’s a lot of work, but the musicians get a break between scenes and between takes.

These folks had one take to get things done perfectly in front of around 2,700 people live. They even played the 20th Century Fox fanfare before “A long time ago in a galaxy far, far away…”

I’ve been growing up with these soundtracks since I was eight years old (go ahead and do the math, I’ll wait). They are a part of my emotional landscape. I listen to the music while I’m writing: fiction, nonfiction, Star Wars stories, what have you. It inspires me and bolsters my mood in ways that are difficult to describe without getting exceptionally mushy about it.

However, after a while, you get used to the background music. It’s just there, and you don’t think about it as the product of 40-some talented individuals all working at the same time. So for me, to hear the music live or in a place other than in front of my laptop is a visceral experience. I kind of expected to get choked up when they started playing it, and I did. I suppose the reason for that is because in person it feels more real: it’s not just some background tracks on a story I’ve watched 1,000 times, it’s out in the real world, and there are a bunch of talented professionals playing music that I love in person.

There were only a couple places where OPO did not play, those being where the band in Jabba the Hutt’s palace were singing. They also didn’t have a choral group on hand to do some of the background (think the Emperor’s theme or the celebration theme at the end). Everything else musical seemed to be there, and was played live.

Because there was the film being shown in the background, you had the audience reacting to that live as well. Why is it that we (I) respond emotionally to hearing other people cheer the same things I would cheer? I tried to note the places where the crowd applauded the orchestra or the film–usually it was the film because we’re visual creatures, but we were there to hear the orchestra, after all.

And as usual, I started asking myself a lot of questions about the conducting process:

And so forth. I’m one of those folks whose enjoyment of the film is not spoiled by learning “how the sausage was made.” If anything, the details fascinate me. As I noted during the 48-Hour Film Project, there are many constraints under which filmmakers and their associated professionals must work. And yet in the case of great movies, it all does work, and it’s amazing to watch.

If I had any quibbles with the experience, they were few and minor:

There might’ve been a very few spots where the OPO didn’t match the London Symphony’s score 1:1, but good grief, their timing was impeccable, so far as I could tell. And I’m obviously a Star Wars geek, so I’d notice. But wow, it was just marvelous to enjoy a live performance of this music! I hope the Dr. Phillips Center runs it again. I’m not so keen to watch the prequels again, but the original trilogy was an integral part of the mythology that shaped my youth (ages 8-14), and it’s great to know that the music continues to move me.

One thought on “Concert Review: Return of the Jedi”